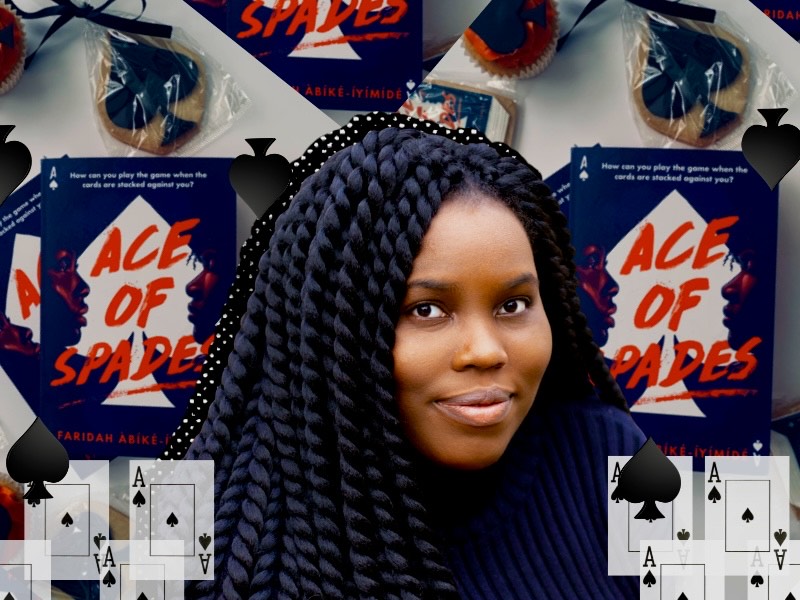 Faridah Àbíké-Íyímídé is revitalising the world of literature, one book at a time. At 21 years old, she secured a £1 million book deal, whilst balancing an English Literature degree in Scotland. Her debut novel, Ace of Spades is dubbed Get Out Meets Gossip Girl and is a tale about two Black students, Chiamaka Adebayo and Devon Richards, attending the illustrious Niveus Academy.

Delving deep into the heart of institutional racism and elitism, we come to learn about how money talks, social currency is everything, being perfect is a prerequisite and even if you fit the criteria like Chiamaka, being Black at a private school still makes you ‘different’. Our Head Girl Chiamaka, who is aiming to attend Yale, isn’t afraid to get what she wants – at all and will go to the most extreme levels, if need be, whereas our talented musician Devon Richards, aiming for Julliard, buries his head in the music room until his private photos get exposed. However, the anonymous texter, Aces, is out to get them and not only ruin their reputations but their livelihoods too.

Speaking to Faridah, I learned that her love for reading stemmed from her mum who used to read Nigerian folklore to her, and she mentioned that she “loved how dark and interesting they were.” As a fan of rich teen stories, I thoroughly enjoyed Ace of Spades and asked whether there’s a sequel in the works and she mentions, “if enough people asked” and her publisher gave her the green light, she would definitely consider it.

As Ace of Spades is a social commentary on institutional racism, sexuality and class, I asked Faridah her aspirations for the novel and what she wants readers to gain from it.

“I want readers to know that Black people are not a monolith, we’re very different, with different interests and everything.”

Furthermore, she notes that despite the global anti-blackness and traumatic experiences Black people go through, “that doesn’t have to be our life. It doesn’t have to be the full story, it’s not everyday sadness and brutality, we deserve happy endings and hopeful futures.”

There’s been a steady rise of young students securing international book deals, such as Chloe Gong, and Faridah’s main piece of advice for aspiring authors is to “always ignore the naysayers”. She states that it’s common for some people to view much younger writers as inexperienced. Like anything, it’s important to make time, and Faridah recommends having a schedule because it’s easy to postpone or defer our dreams, or say, “if I had more time, I would be an author”, – but it’s a matter time management. Furthermore, she mentioned that “make sure you finish your manuscript, even if it’s bad.” According to Faridah, it’s easy to stop writing once it becomes hard. In sixth form, Faridah completed a full manuscript, which let her know that she can get to that final stage, even if it wouldn’t be published.

Hailing from a Yorùbá background, it was important for Faridah to display aspects of her culture and Nigerian-ness in her writing, from her character Chiamaka Adebayo and down to her publishing team! Faridah relays excitedly how organically the team was formed, consisting of an editor, publicist and illustrator. Her US editor, Foyinsi, is also Yorùbá, and Faridah was intentional about seeking a Black publicist, to ensure nothing was lost in translation with a white one. It was also a conscious decision to engage a Black illustrator and lucky for her, she was able to commission one of her favourite Nigerian illustrators. It’s so inspiring to see a British-Nigerian author with a Nigerian team, considering how Black authors are significantly underrepresented in UK publishing.

Not only will the novel be published in the UK and the US, but also Brazil and Poland! It was important for the book to be published in various languages, in order for people from different backgrounds and different mother tongues such as Portuguese or Polish to enjoy and immerse themselves in the book. Faridah is particularly fond of Brazil due to their enormous Black population, rich music and culture. In general, she mentions “having my book translated is like a dream because I want to reach as many Black readers as possible.”

Now, not everyone is a fan of the book to film adaptation, but I was burning to ask Faridah who she would cast. Whilst she is predominantly known for singing, Faridah relayed that Chloe Bailey would be a great Chiamaka or instead, she would rather have new talent and undiscovered actors secure these roles. In response, I mentioned that Lovie Simone, the iconic actress in Greenleaf and Selah and the Spades, would also be a perfect Chiamaka.

Furthermore, Faridah organised a giveaway for readers in the Global South and I love the inclusive nature of this as it’s so easy for readers in the West to order books online, meanwhile some people in the Global South have limited opportunities. Additionally, Faridah mentions that “a lot of the time, publishers and authors leave people in the Global South completely out of their campaigns, almost as if they don’t matter.” She states how unfair this is and it assumes that there aren’t readers across the world, and it feeds into the notion that “reading is a white people thing”, when in reality, it’s far from the truth. Ultimately, the exclusion of Global South readers is just lazy and authors like Faridah want to ensure that her books are accessible to all.

A compelling young adult thriller, Ace of Spades offers a necessary social commentary on the disparities between Black and white students and the intersections that come with race such as class and sexuality. For those interested in the dark academia aesthetic like Faridah, this book is for you!

You can order Ace of Spades at your local retailers including Bookshop.org and Hive.