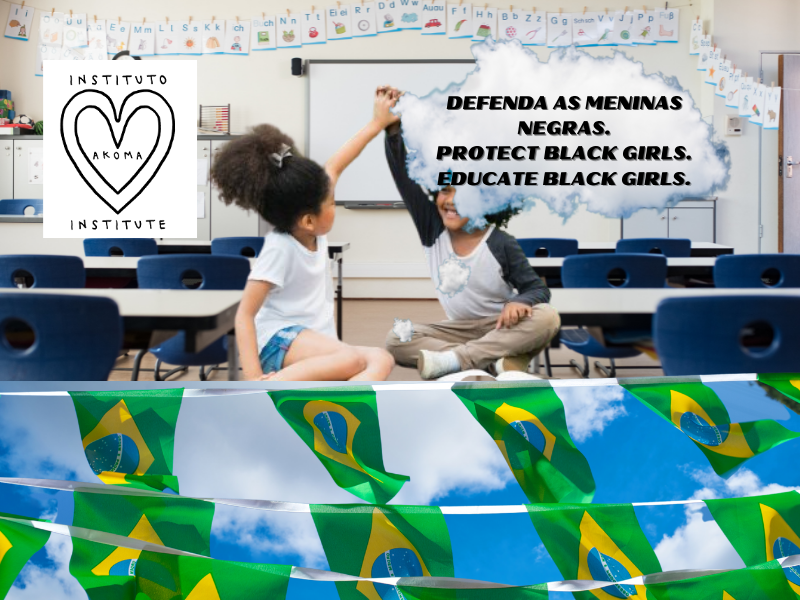 Whenever the terms “African diaspora” or “Black diaspora” are mentioned on social media, they almost always exclude the voices of Black people in non-Anglophone regions of the world, specifically the Global South. Countries such as Brazil and Colombia have a rich history of Black female intellectuals but because of the lack of exchange between the Global North and Global South, largely due to language barriers, it appears as if movements or icons do not exist. It is patronising and a huge disservice to the movements led by Black people in Latin America.

However, Delali from the Akoma Institute is rectifying this narrative with the work of the Akoma Institute. Passionate about equitable education and reflective of her experiences as a young girl in the British educational system as a Black teacher, Delali realised that the education space was flawed, and Black Women and girls were intentionally disenfranchised. Furthermore, Delali deliberately chose to start Akoma in Brazil as the institute aims to become a global organisation. Importantly, to avoid the Western saviour complex, starting it in São Paulo meant that she could build community with local Afro Brazilian women.

Akoma Institute prides itself on being a global learning community for Black and Afro-indigenous girls, aiming to amplify the voices of those who are ignored.

Outside Africa, Brazil has the largest population of Black people in the world, but it’s not considered to be a hub of Black liberation discussions, as countries in the Global North with high Black populations often take the centre stage. She importantly notes that “seeing as this is a country where 55% of the population identify as Black and has a very similar sociological history to countries like the United States, as a country that was built on the exploitation of Black labour and indigenous folk – their voices are barely amplified.”

As Black Women, most of us are aware of the likes of Angela Davis, Audre Lorde or Chimamanda Ngozi Adichie but as extraordinary as they are, it’s important to spotlight the voices of non-Anglophone Black feminists. Whilst speaking to Delali, I was introduced to feminists such as Lélia Gonzalez who had a huge influence on her understanding of the Black experience in Latin America and the importance of intersectionality. Virgínia Bicudo was the first Black social scientist in Brazil, who dedicated her studies to how understanding the politicised identity of mixed-race Brazilians would be used as a campaign to convince Black Brazilians that racism is nonexistent and that they live in a post-racial utopia, when this is far from the truth! Carolina Maria de Jesus is another one of Delali’s favourite Brazilian feminists who centred her work on her own personal experience, as a Black resilient single mother, from the Periferia community and her work, ‘Quarto de Despejo’ (A Child of the Dark), was crucial for Delali to understand the intersections of poverty and environmental racism within the experience of Black Brazilian girls and adolescents. Learning about these Black Brazilian feminists reminded me that it is imperative that we globalise our perspectives.

Our conversation taught me about the rich history of Brazil and why São Paulo was the best place for the Akoma Institute to start. The city boasts a huge Black migrant population from Haitians, Afro Venezuelans, Nigerians, Cameroonians, Afro Colombians and essentially many Black migrant groups fleeing from crisis, in search of opportunity. Historically, São Paulo has always been this way from Japanese migrants, Italian migrants, Jewish migrants, Argentinians and so on. But Black people had to come to the city for work opportunities after the abolishment of slavery where there was minimal infrastructure for Black people to support themselves and the city was the pinnacle of capital and economic wealth, making it the obvious choice for many to migrate. But as we know, migration can be a life or death situation for impoverished Africans and it was bittersweet to learn that many African migrants used São Paulo as a transit point to reach Central America and then Mexico to cross the US border. Unfortunately, the route is known for exploitation and trafficking and some never make it to the US and stay in São Paulo.

Ultimately, the plethora of Black identities and migrant history of the city motivated Delali to start the Akoma Institute there. At the moment, the Akoma Institute works with Brazilian girls and not the migrant communities because of the precarious nature of being Black and a migrant from the Global South – the lack of an address, internet and language barriers make it even more difficult, as many of these Black migrants speak French or Creole. Delali tells me it is important to create language equity across these groups and wants to make this a reality.

Akoma Institute prides itself on being a global learning community for Black and Afro-indigenous girls, aiming to amplify the voices of those who are ignored. Delali rightfully notes that it’s not that they don’t have the voices, they don’t have access and want to position Akoma to be the megaphone for these girls and families, amplifying and centering their voices. Being a Black Woman with a British passport gives you an advantage, simply due to citizenship privileges, and Delali notes how she gets treated differently when people hear her British accent but as a dark-skinned woman, sometimes she is assumed to be from Bahia or a migrant. Nonetheless, Delali uses her privilege and power for good, to continuously be that bullhorn for Afro Brazilian women and girls. Furthermore, she is inspired by the people around her and the diversity of subcultures in São Paulo, and implements some of the subcultures into the curriculum – from the skater community in Liberdade and DJing, to the surfing subculture, who are “climate justice activists and command the waves”.

In amplifying the voices of Afro-Brazilian women, here are some of their thoughts on the Akoma Institute and being Afro-Brazilian:

Q – Akoma Institute is founded on the basis of educational justice and aims to create a global learning community for Black and Afro indigenous girls through zines, digital learning and pop up schools. What does Akoma Institute mean to you as a Black Brazilian woman/person, given the socio economic and historical and structural inequalities against Afro- Brazilians?

A- It means gaining greater strength in the struggle through support networks with other institutions and collectives, both in Brazil and in other countries. And learning from different cultural and political realities and contexts.

Q – Outside of Africa, Brazil has the largest Black population in the world but unfortunately being situated in the Global North makes other Black people in the diaspora ignorant to the diversity of Brazil and the history of Afro resistance in Brazil such as the Movimento Negro Unificado founded in the 1970s in Sao Paulo. What is the best way for Black people outside of Brazil and Latin America to amplify your cause?

A – I believe that sharing experiences of struggles and references from people who were and are important in Brazilian anti-racism (which Akoma does on Instagram), is a very important contribution. Maintain a constant dialogue about events, protests and strategies of struggle and care, regardless of the location to the north or the global south, since as Blacks in the diaspora, we share similar experiences. However, taking into account the regional intersections in which Black populations live, is super important. For example, being Black in the south of Brazil has its specificities of what it is to be Black in the northeast, because the historical and political construction of the south operates in another dimension. Our culture was and is forged by the Poles, Ukrainians and Germans, where we live with their colonies that are the result of a racist state policy that encouraged the arrival of these groups to replace the workforce of Africans and Blacks. Hence racism in the south is based on this specific historical policy with a specific impact on the way of life of Blacks in that region. Thus, investigations into the history of racial struggle and solidarity by Black movements outside the country, in addition to the need for general investigations about Brazil as a “nation”, it is important to note that they consider the complexity of this racism, added to Brazilian regional issues.

Q- What are your hopes and ambitions for Afro Brazilian women and girls?

A- As a result of the struggle of Black women, I feel that I have a responsibility to continue their legacy and open paths for other generations, just as they did. The result and advances of some guidelines of race, gender and sexuality that they managed to obtain makes me hope for better days and not give up on building a society with greater opportunities for our girls. Among these opportunities, I dream that they can access mental health services and with a critical and active understanding of what it is to be Black and a Woman in our society. I also hope that they can access educational spaces in an equitable way considering their histories and pluralities.