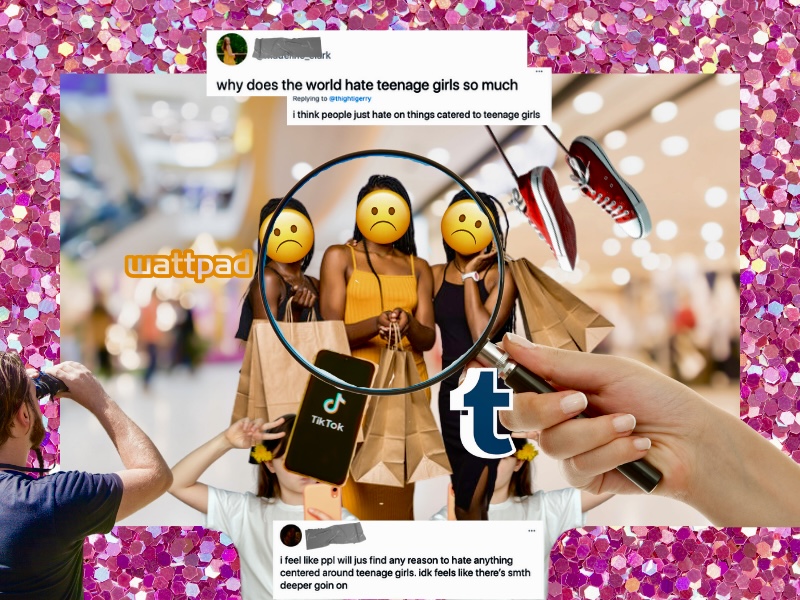 Teenage Girls are the original Pop Culture Zeitgeists, but Misogyny ruins this

Teenage Girls are the original Pop Culture Zeitgeists, but Misogyny ruins this

Whether you like it or not, teenage girls have the biggest impact on pop culture. It’s not up for debate. Yet, we get the most hate and vitriol. Is it misogyny or just adults bored with their lives? Probably both, but to deny the imprint that teenage girls have left on pop culture is a disservice. The consumer power teen girls wield is loved by brands, but loathed by society – why does society consider young girls intellectually redundant because of the perceived ‘hysteria’ they show towards a subject, person, brand etc., yet simultaneously ignore their commercial influence? The answer is rooted in misogyny. Girls aren’t allowed to enjoy things that make them happy. Now, coupled with being a Black girl with ‘unconventional’ interests or ‘girly’ interests, it opens the floodgates for misogynoir.

Often, this is where the useless “I’m not like other girls” trope stems from – internalised misogyny and wanting to seem edgy, cool, and different. Whilst it isn’t a bad thing, what’s wrong with being like other girls who take pride in their interests, no matter how ‘weird’ one might find it. The criticism is often masked behind hatred, jealousy or insecurity and arguably prompts teenage girls to ‘grow up’ faster – so they can get taken seriously. Meanwhile, sports fans were throwing tantrums and racist abuse, destroying property, and crying foul during the Euros when their team failed to get a ball in the goal. You really hate to see it. But say a girl is interested in things that boys stereotypically enjoy more, there’s always the assumption that she’s faking it, otherwise she is quizzed on how many albums a particular artist released and must know every single fact about said football or basketball team.

When we think of fandom, people instantly think of The Beatles ‘craze’, when in reality fandom has been in existence for centuries as early as the mid 1800s. Hungarian pianist, Franz Liszt, had overwhelming support from Women and out of the support, the term ‘Listzomania’ was born.

Years ago, anything that was marketed towards teen girls was viewed as ‘silly’ or ‘boring’, when this isn’t rooted in reality. Think Twilight, The Vampire Diaries and combine this with social and consumer power, teenage girls irrefutably shape pop culture as we know it today. With fandom culture, teenage girls are tirelessly organising online events for fellow fans, be it streaming parties for album releases, or watch parties for their favourite shows and movies – the dedication is real and it’s commendable to see how devoted and invested teenage girls are for the things they love.

As much as Black teenage girls contribute to pop culture, they continuously get excluded by the things they create.

The vitriol for teenage girls doesn’t necessarily stop after you turn 18 but extends to younger Women too. It’s as if we are expected to lose interest – suffering from retrograde amnesia! Meanwhile, men are not held to the same standard when it comes to anime, comic books or sports. But let a 20-year-old lady display her love for Sailor Moon or Twilight, she gets ridiculed. With Twilight, there are some concerning topics such as confederacy, racism and more but of course, it’s completely normal to criticise the media you consume. It’s interesting to see how these romances are targeted towards younger girls too. Edward in Twilight is possessive and manipulative but because of his looks, it’s, okay? If we interrogate this further, it can be broken down to that tiring and dangerous archetype of ‘ if he’s mean to you, its because he likes you,’ the pathetic explanation society has constantly thrown at girls. However, it’s great to see that younger girls have become increasingly aware about the signs of abusive relationships – it’s just strange that these tropes have always been marketed towards teenage girls.

People hate to see teenage girls enjoy things unapologetically – be it The Vampire Diaries, or the colour pink, celebrity culture or minor things like matcha bubble tea. Exploring your passions and interests is a normal thing, especially as a teenage girl. Though we cannot divorce capitalism from our interests, why does there have to be a deeper meaning? We see how the older generation and corporations constantly want to hear from teen girls yet fail to centre them in their strategies. It’s capitalistic at best. But I can’t help thinking that the rise in support for their consumerism excludes Black girls.

Our interests are just commodified, repackaged as support or empowerment then sold back to us. So, do teen girls ever really win?

When Kayla Lewis coined the term ‘on fleek’ back in 2016, corporations instantly snatched it up, leaving her with nothing. When Jalaiah Harmon invented the Renegade dance which blew up on TikTok – it was associated with white TikTokers. As much as Black teenage girls contribute to pop culture, they continuously get excluded by the things they create. With that, we saw Black TikTokers strike to stop having their dances in an act against plagiarism. Initially, I thought it was a bit extreme but in hindsight, it’s great to see young Black people stand up for their intellectual property – no matter how ‘trivial’ a dance routine might be to some. In fact, Keara Wilson who created the #SavageChallenge, for three-time Grammy winner Megan Thee Stallion, has earned copyrights for her dance with the support of award winning choreographer, JaQuel Knight. Either way, teen girls are still the underappreciated cultural innovators that society chooses to scoff at. Our interests are just commodified, repackaged as support or empowerment then sold back to us. So, do teen girls ever really win?

However, thanks to social media, there is a space for Black teen girls interested in any form of pop culture – be it anime, K-pop, film, football, literature, music, fashion, and more. It’s important to let girls know that their interests are valued, and they shouldn’t be embarrassed about liking what makes them happy.