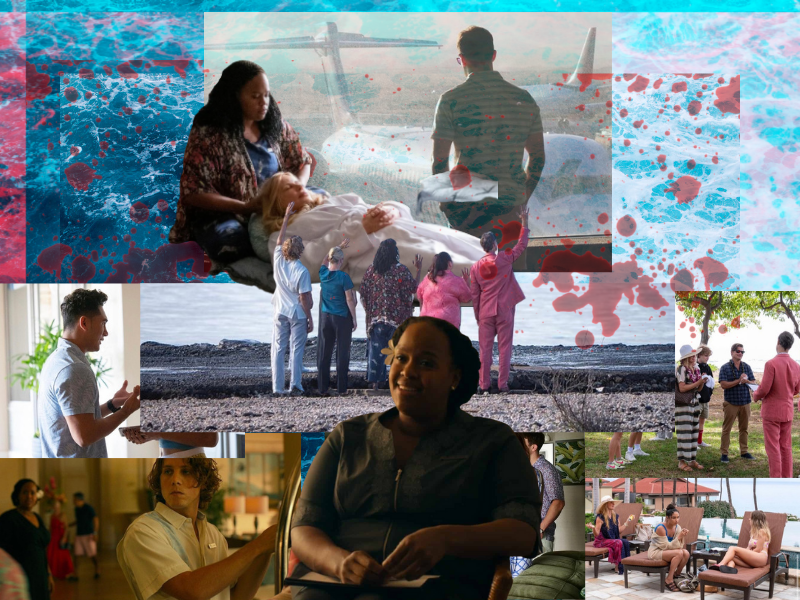 The satirical show White Lotus is a portrait of unbridled exploitation

The satirical show White Lotus is a portrait of unbridled exploitation

The White Lotus is a 2021 Sky Atlantic x HBO show that explores the dynamics between the guests and staff at a Hawai’i based holiday resort hotel. The toxicity and dubious morality of these relationships makes the resort a nightmare for all present in different ways.

There are many complex characters whose stories intersect in ways that expose issues of social power. Viewed by many as a biting satire, it presents the uneasy dynamics between the white consumer and the marginalised individual.

The show was created, written, and directed by Mike White, a maverick creator behind the writing of pop culture classics like The School of Rock and Freaks and Geeks. White has a fascination with human interactions and relationships. In fact, in 2018 he was a contestant on the reality show Survivor, in which contestants are stranded in a tropical location, largely left to fend for themselves. His experience of being in a remote location maybe the inspiration for the show.

White eagerly serves up a sense of scenic scandal in this hit show. As the plot unfolds, the shiny veneer of the hospitality offered at the hotel begins to unravel, revealing exploitation and deep personal crises.

The picture-perfect destination turns into a frightening hellscape. There are health scares, secret love affairs, drug frenzies and violent showdowns

The show begins in an airport in Hawai’i. Viewers are introduced to the character Shane who is brooding whilst looking out of the window, as we watch a dead body being loaded onto the plane. The murder mystery hook is executed well leaving the viewer intrigued – wondering who was killed and why.

All the while, the guests’ neuroses and darkest sides also come to the fore, turning the picture-perfect destination into a frightening hellscape. There are health scares, secret love affairs, drug frenzies and violent showdowns.

The chaos mixed with the exotic has been present in art for centuries. As Booth and Rigby argue in Modernism and Empire (Writing and British Coloniality) – a key dilemma in modernist literature was ‘the relation of self to other, and the power relations involved’.

The issue of travel and power is evident in literary canon classics like Arthur Conrad’s Heart of Darkness. Despite Conrad’s interest in exploring the white man’s corruption and psychological dread; his work did not recognise oppressed peoples as human beings.

In this way, both White and Conrad can give compelling depictions of white people unravelling without fully caring to critique the violence they enact amidst their dysfunctions.

Status is a theme that fits perfectly with consumer capitalism and hospitality. Importance can be purchased, and we see that Shane relies on this for his identity

In fact, the white man’s identity crisis creates more harm, blaming his bad behaviour on his environment, just as Conrad portrays his character Kurtz as entering Africa pure and then experiencing moral decay.

Like Conrad’s Kurtz, the character Shane enters Hawai’i as an entitled white man. Shane works in his father’s real estate firm and is smug about being on holiday with his fiancé. As we see more of him, we witness his obsession with social status, making him such an insufferable customer.

Status is a theme that fits perfectly with consumer capitalism and hospitality. If you pay for a higher rated hotel, you get a bigger room, more services and perceived prestige. Importance can be purchased, and we see that Shane relies on this for his identity.

Unable to gain access to the honeymoon suite they have paid for, Shane is consumed with rage by the administrative error. Shane’s entitlement leads him to pressure the manager daily, to his fiancée’s frustration. The tension builds and builds until he eventually inflicts violence on the manager, murdering him.

The only Black female character Belinda, becomes disillusioned with the sector when she realises that her innate kindness is a commodity.

The show is gripping and entertaining in tone and content, but the ‘other’ is not fully explored. The hospitality staff are overshadowed by the storylines of the white tourists – this marginalisation of service-role characters is part of the point. Early in the show, we are introduced to the gay hotel manager Armond, who hates his job, and like most hospitality workers is ‘invisible’ – he knows when to show up and when to disappear.

The only Black female character Belinda, becomes disillusioned with the sector when she realises that her innate kindness is a commodity. The predatory exploitative force of hospitality unfolds in her dynamic with the troubled traveller Tanya McQuoid, played by the iconic Jennifer Coolidge. Tanya offers to invest in Belinda’s dreams of opening a wellness practice, but fails to honour her word, instead giving her a wad of cash as a sort of apology. As such Belinda is exploited in a ‘mammy’ like dynamic, where she devotedly caters to the whims of those that oppress her.

The White Lotus is a very strong show in terms of cinematography. Some of the transitions between scenes and shifts in action are punctuated with visuals of waves violently crashing against the shore. The natural force of the imagery mixed with the eerie musical score by Cristobal Tapia communicates the building crises and the juxtaposition of the holiday setting with individual turmoil.

The homicidal holiday ultimately stresses the violence that sustains luxury. Most importantly, it exposes the self-interested nature of wealth and how far the privileged will go to retain their favourable position.

As a viewer, it is unsettling to witness a lack of accountability on such a large scale. As we witness Shane coolly exit the hotel despite being a murderer, we are left to ponder on the frightening inequalities of the world within and beyond the show.

When we zoom out of the corruption in The White Lotus resort, Hawai’i remains a site of industrial exploitation to this day. Residents urged holiday makers to stay away in the face of the pandemic, but Westerners persisted nonetheless, causing pollution and posing health risks to an island with existing pressure on resources.

Beyond this, the nation’s tourism generates billions. According to the Hawai’i Tourism Authority, in 2019, visitor spending alone generated about $2.07 billion in revenue. But with these mass profits comes mass exploitation as the industry leaves hotel employees underpaid.

If the show is a portrait of unbridled exploitation, then it succeeded in its mission but not without leaving an uncomfortable aftertaste that may never be resolved. Just like our offscreen contemporary world, accountability for injustice is not guaranteed.