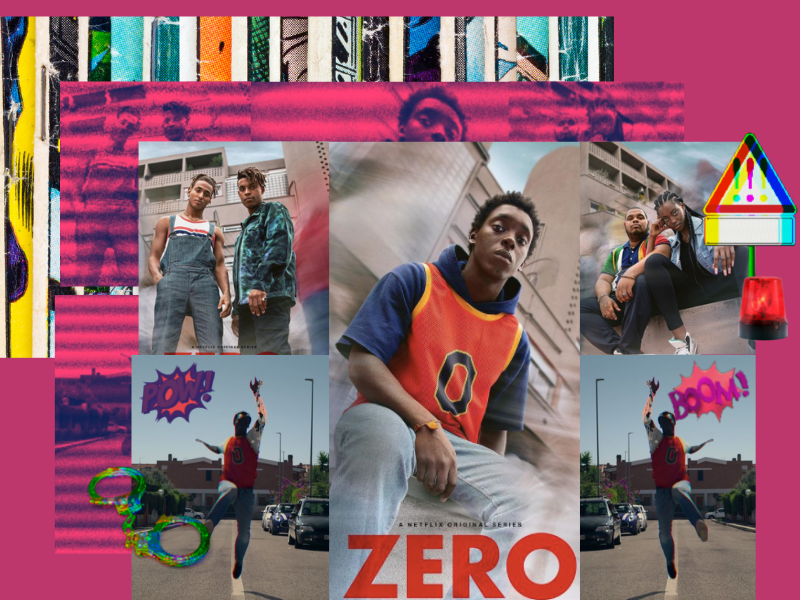 The series follows the life of a timid pizza delivery driver Omar (Zero), played by Giuseppe Dave Seke, bestowed with the superpower of invisibility. Like many superhero films the audience follows Omar on a journey of self-discovery whilst using his powers to save his hometown.

Set in a neighbourhood found behind the suburbs of Milan called Barrio, with a largely immigrant population, Omar says he’s practically considered invisible by the city’s population.

In the opening scene, Omar is sitting at his desk doing what he loves the most drawing manga cartoons with Black characters whilst listening to Afro pop in his headphones. He jokingly says, “What’s the link between a Black kid and Japanese manga? Nothing.” With his dreams of becoming a comic harshly contrasted by his delivery boy reality Omar often finds himself stuck between two worlds.

The Barrio is a neighbourhood that strives for community spirit, busy with the sounds of over competitive games of basketball, children playing in the streets and the roars of people gathered watching football matches at the local bar.

When the realities of gentrification begin to become prevalent in the Barrio, with theft and petty crime rates rising at an alarming speed the residents begin to fear that they’ll be the next ones to go.

For the self-proclaimed hero of the Barrio, Shariff played by Haroun Fall is determined to do everything in his will to make sure that doesn’t happen. When Sharif notices that Omar can become invisible, he forces him to use his powers to save Barrio and lovingly nicknames him ‘Zero Barrios Robin Hood’. In that moment Omar’s two worlds collide.

This new found alliance brings Omar out of the shadows of Barrio and into the light as he gets initiated into a new friendship group consisting of Momo (Dylan Magon), Sara (Daniela Scattolin, Innocent/Inno (Madior Fall) and Shariff. Together this group of friends try to save their neighbourhood from a corrupt real estate developer.

Intentionally set in the present day, ‘Zero’ not only gives us a show with a Black protagonist with superpowers but also sheds light on the issue of corrupt policing and over policing in urban areas in Italy.

I believe it was good to touch on this issue for the people watching who may not know Italy beyond the gaze of a holiday destination.

The subject of dual identity is brought up throughout the show. As an Italian immigrant of Senegalese descent, Omar comments on his dad’s lack of interest in being “more Italian.” Despite the family migrating to Italy, Zero’s dad is stuck in his Senegalese roots.

Zero: The Unsung Hero. Cast of the Netflix Show

Like many European countries the show acknowledges, how Italy’s population has become more diverse over the past few decades. The children of these immigrants, as Italian as anyone else, are an integral part of the country’s future and deserve to have their stories told on screen. This is why despite the language barrier, ‘Zero’ is a tv series that many young, Black second-generation people will relate to.

This is the importance of film and tv as social commentary as well as entertainment, giving the audience a glimpse into a world that they may not be aware of. I also loved that the subject of the series wasn’t romanticised because of its location and touched on the issues Black people face day to day.

Not only was there representation on screen but also in the show’s writers and directors. The ground-breaking series was co-written by Antonio Dikele Distefano, born in Italy to Angolan parents and was inspired by one of his books. Netflix’s new mission to tap into more international talent, has resulted in great original series such as French based tv series ‘Lupin’ and the South African Original ‘Queen Sono’. Both shows feature Black leads in more fictional roles without conveniently missing out their culture.

Overall, I enjoyed the progression of the show, with an episodic plot structure, the stories were linked together by the main protagonist, Zero. The use of foreshadowing and little clues to hold onto throughout made the show easy to follow. There was a perfect balance to the number of characters that were introduced and their significance to the storyline. However, just when you think you know where the series is going, we end up back at zero.

In comparison to other Netflix coming-of-age shows such as, ‘The Get Down’ and ‘Blood & Water’, as the audience starts to see glimpses into the other characters lives the storyline begins to shift.

In ‘Zero’ Omar’s tumultuous family dynamic is where the shift takes place. The audience watch Zero become so engulfed by the set task of saving Barrio and later his love interest that he barely spends any time at home.

There is a lot that can be developed in his family life specifically with his sister Awa played by Virginia Diop, are the powers hereditary? The series ends on a loaded cliff hanger and many unanswered questions, which will hopefully be addressed in the next season of the show.

Written By: Marvel Kalu – a freelance writer and journalism student at Kingston University of London, who enjoys writing about film, tv and culture. Follower her on Instagram and check out her portfolio