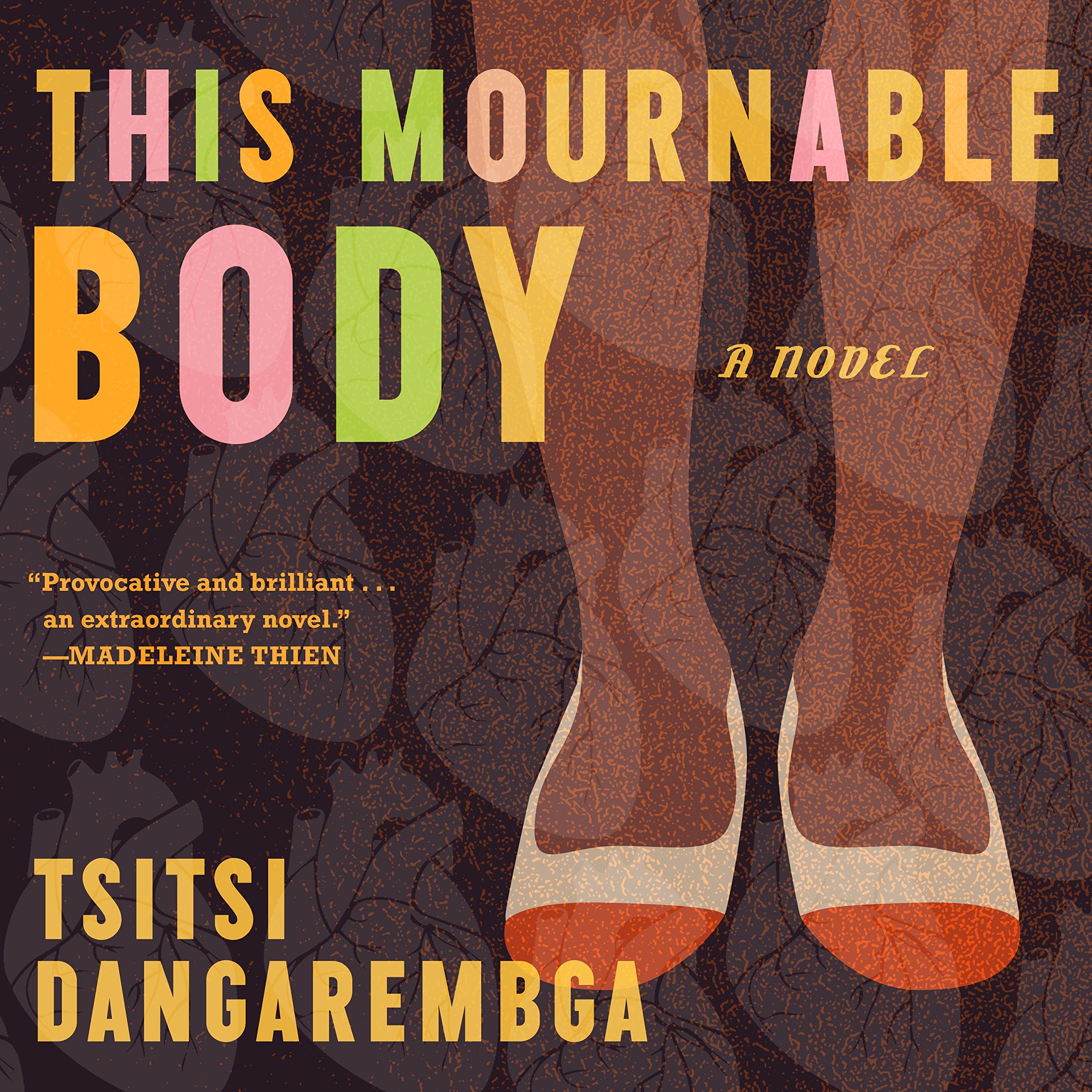 2018’s release of This Mournable Body presents the third instalment of the misadventures of Tambudzai Siguake, following on from 1988’s Nervous Conditions and 2006’s The Book of Not.

In 1988, Tsitsi Dangarembga made her literary debut with Nervous Conditions, a book we’ve already discussed at Real Reads. The story of a young girl selling mielies (maize) for school fees against the backdrop of a British-occupied Zimbabwe of the 1960s matched the era’s paradoxical tone of defiance mixed with a deep reverence for colonial and patriarchal authorities. The book would go on to cement Dangarembga’s legacy in the African literary canon, becoming the first novel by a Black Woman in Zimbabwe to be published in English, earning the Commonwealth Writers’ Prize in 1989 and making the BBC’s top 100 stories that shaped the world list for 2018. Her latest offering, This Mournable Body, was shortlisted for 2020’s Booker Prize on the 15th of September of  that year, with the longlist being announced on the 28th of July. Just a few days after the longlist was publicised, on the 31st of July, the author was arrested for taking part in a peaceful protest against a corrupt Zimbabwean government in her home country’s capital of Harare. How did Dangarembga go from a national treasure to a “Persona non grata”, as she so wryly jests?

Reflecting on the juxtaposed events of last year, the author comments, “Living in Zimbabwe is complicated at the best of times, at the moment, and when tragedies happen in such complication, it really becomes a little surreal.”

On her decision to participate in the protests, she says, “I just felt that I had been one of the people who had been very vociferous in supporting the demonstration [against government corruption] and encouraging people to use their citizen’s agency and their voices and that it really would be a betrayal of what I stand for and what I had actually spoken, for me now not to go because I was afraid. So, I went, and I was arrested.” 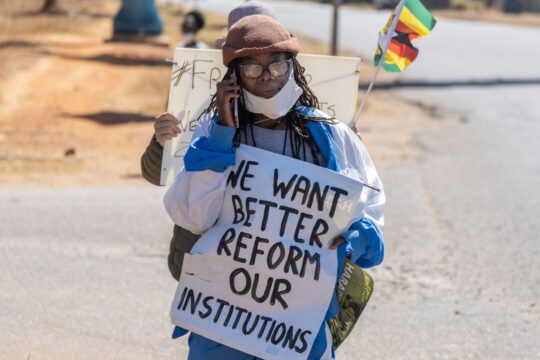 “On the brink of financial destitution and psychological ruin, the novel’s command of “Women, let us wail together” summarises its grief-stricken outlook.”

Dangarembga’s writing mirrors this conflicting existence of having to hold oneself to both the best of times and the worst of times in a presently politically and economically unstable Zimbabwe. It calls to an unsettling legacy of broken promises from the past, failed dreams of the present and an uncertain future climate, which are the conditions explored in Dangarembga’s latest release.

In This Mournable Body, we see our protagonist, Tambudzai Siguake (Tambu), approaching middle-age and living in a Women’s hostel in Harare, from which she’s about to be evicted owing to her increasing “antiquity”, as the author sharply describes. She’s just resigned from her copywriting job at an advertising agency, under the pretence of marriage, and is navigating the aftermath. Long gone are the days of burgeoning prosperity depicted in Nervous Conditions, where a pre-pubescent Tambu was so seemingly lifted from the burden of poverty befit to people of her circumstance – Black, African, Woman, rural – through the patronage of her English-educated uncle, Babamukuru. We also see a departure from the high-achieving Young Ladies’ College of the Sacred Heart schoolgirl we saw at the beginning of The Book of Not. Instead, we return to a Tambu jaded by the limitations of her Blackness, her Africanness, her Womanhood and her impoverished origins that she so deftly fought in her youth. On the brink of financial destitution and psychological ruin, the novel’s command of “Women, let us wail together” summarises its grief-stricken outlook.

The story of Tambu’s life embodies the hopes and anxieties, along with the achievements and failures of her nation. Tangible moves towards independence and an end to white minority rule took over during the 1960s in Zimbabwe, where the events of Nervous Conditions can be placed. At the time, dreams of a self-sufficient Zimbabwe were emerging, mirroring the tenacity shown in Tambu’s fight to receive an education initially denied to her on the basis of her gender, race and class. The Book of Not presents an unsatisfied reality to realised outcomes. Tambu’s achievement of the best O’ Levels in her class does not save her from falling into the same psychological torment at the hands of colonialism that her cousin, Nyasha, faced. Nor does it materialise the rags to riches story she had written for herself, as she ends up as a severely underpaid copywriter whose words are plagiarised by her white peers. With this second book set against the backdrop of a liberation struggle and the eventual victory of independence in the 1980s, Robert Mugabe’s concurrent first presidency was promised to radically enfranchise indigenous Black life in Zimbabwe, with an end to white-minority rule. The target to resettle 18,000 Black families onto 2.5 million acres of white-owned land promised new prosperity for a previously oppressed community. Yet, the reality saw thousands of Black people taking on poor quality land that yielded little in the way of socioeconomic mobility.

Even temporally, we see similarities. Though set in the 1990s, This Mournable Body release year comes 38 years after independence, mirroring Tambu as she herself reaches her late-thirties and now must negotiate the failed expectations of time that couple the anti-climatic outcomes of her prestigious education.

“the context from which Dangarembga writes her third book viscerally connects to the “ongoing trauma” in which people exist in her home country.”

Dangarembga comments on this personification of Zimbabwe’s political timeline through her series’ main character, saying, “Tambudzai is really broken, psychologically and spiritually, when we meet her in This Mournable Body. Yes, she was a schoolgirl when we first met her in Nervous Conditions, and it looked as though life was possible at that time in Zimbabwe, which was Rhodesia in the 1960s. Education was a guarantee for a better life if you were Black.

“Independence came, and everything looked even brighter. Now the country was independent, opportunities were opening up. So, Tambudzai was sure she was going to have the most wonderful life, and then independence began to turn sour. And she ended up working in an advertising agency which was run by white people because the economy was still in the hands of white people at the time.

Any follower of Dangarembga’s work will know that her titles always signify a deeper and more ominous meaning. Her debut, Nervous Conditions, lends itself to Jean-Paul Satre’s preface to Fanon’s The Wretched of the Earth, in which he describes the status of “native” as “a neurosis introduced and maintained by the colonist in the colonized with their consent.” Its sequel, The Book of Not, speaks to the denial and unfulfilled expectations among colonised people wrought by the theft of self, authenticity and autonomy that occurred under white occupation. Thus, keeping with tradition, This Mournable Body envelopes Dangarembga’s narrative deeper into postcolonial critique. The name alludes to a 2015 essay by Nigerian-American writer Teju Cole, ‘Unmournable Bodies’, written in response to the Charlie Hebdo shooting, which highlights the disparity in mourning afforded to Western deaths and those in the Global South.

Thus, the context from which Dangarembga writes her third book viscerally connects to the “ongoing trauma” in which people exist in her home country. Such is finalised through the dramatic shift in narrative from the third to second person, in a move which expands Tambu’s story from a singular piece of fiction to a collective documentation of an entire nation’s development. This Mournable Body ends with Tambu once again retracting from the path she’d envisioned for herself and setting down another – unknown to both herself and us. Zimbabwe is a country that’s been in decline for decades post-independence, and so, its future also proves uncertain.

Written By: Hannah Uguru, our Commissioning Editor. She is an award-winning writer who is passionate about discussions centring Black Women and the nuances within this identity. Connect with her on Instagram and on her blog.

Morris fought institutional racism, sexism and an economic system that squeezed any real comfortability from the working class to feed the glutinous few