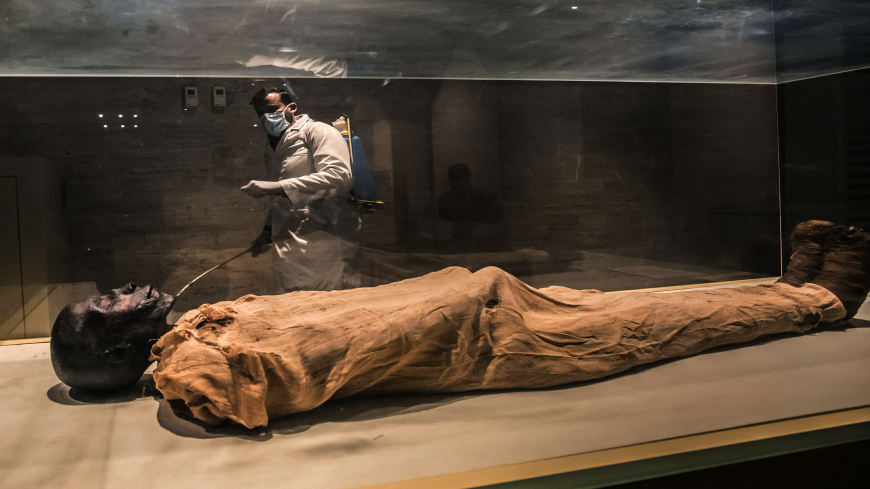 Displaying the Dead is a Disturbing Cultural Identity

Displaying the Dead is a Disturbing Cultural Identity

Considerations for use of the dead often ignore and overrule the sentiments of the marginalised peoples who hold biological or relational claims to these corpses.

Demand for the restitution of national treasures once taken (often ambiguously) by Western establishments is gaining traction. Globally, Western institutions house human remains in abundance, including bones, mummified and modified organs. The stark realisation that members of our lineage are constantly being dug up, stored in jars waiting to be prodded by scalpels, and put up on display is quite frankly an abomination! What impact does this knowledge have on us individually and collectively?

In 2019, Aboriginal authorities voyaged to the Natural History Museum in London to collect bones and fragments of family members originally from the Torres Strait archipelago. One of the elders testified: ‘‘How would you feel knowing that one of your family members is in some strange place and, more importantly, hasn’t been afforded the right burial?”

Last October, the Pitt Rivers Museum in Oxford, England, finally motioned to return their in-house collection of ‘tsantas’ (shrunken heads) to the Shuar and Achuar people of the Amazon basin. Community leaders expressed that they don’t want to be conceived as “dead people to be exhibited in a museum, described in a book, record or film”. Indigenous groups from across the globe constantly participate in this struggle, consistently facing issues when pleading to have their relatives removed from displays and taken home. At the expense of this emotional turmoil, history displays in the Global North institutions continue to encompass human body parts.

The West’s period of enlightenment marked the birth of European excavation to learn and share the practices of global cultures. Accordingly, bodily remnants are well-travelled, studied and displayed. However, consideration for these methods of extraction, use of the dead, and right of possession often overrule the sentiments of the marginalised peoples who hold biological or relational claims to these corpses.

These exhibited groups are overwhelmingly represented in African, American, and Pacific regions, which harbour a history of Western colonial takeover. We can look to Egypt as a contested example. Around 350 institutions around the world house ancient Egyptians mummies, as a vital historical attraction. Yet, conflict arises when we incorporate ancestral claims from local Egyptians.

In a lecture on Egypt’s dispersed heritage by Egyptologist Heba Abd al Gawad, the professor  explicates the racist colonial perception of debating sentiment and ownership over mummified bodies as further confinement and disregard for Egyptian autonomy by Western sites of cultural exchange and academia. This rings true within the context of Egyptian cultural, social and religious integrity. Gawad states:‘‘ regarding the ethics of such research and regarding the wider ethics of displaying Egyptian human remains the Egyptians [are] totally side-lined, totally ignored from such discussions]’’. For her, exhibiting bodily remains is ‘‘disturbing’’. Gawad’s commentary reflects a burgeoning social consciousness in relation to the ethics of archaeological mining.

For instance, after a video of an Egyptian-led excavation that uncovered 59 sarcophagi last October went viral, one social media user wrote: “[…] its [sic] kind of sad that even in death POC can’t escape the prying and opportunistic advances of white people.” Receiving over 210,000 likes and 45,000 retweets, these sentiments evidently resonated with many.

Unfortunately, measures to minimise ancestral harm still often stand at odds with the purist ideologies of allowing the dead to rest

Yet, some defenders of archaeological scholarship dismiss this critique. President of the Ancient Egypt Society of Western Australia in Perth, Jasmine Day, for example, deems those who object to displaying body parts as ‘‘the fashionably offended’’, purporting that the negativity towards such displays is rooted in discomfort and unfamiliarity surrounding death.  This includes those who write to museums stating their dismay at the possibility of themselves or their family being disinterred. Day explains this “sensitive” approach as ignorant and one that demonstrates a lack of awareness for the rights that the dead may possess. That is that the previous wishes of the deceased may not apply as the initial extraction cannot be undone meaning that bodies should be judged in the context of the museum environment.

In archaeology, museum agreements and scientific research, ethical practices are put in place to ensure appropriate restorations to deceased individuals after they are studied. In theory, this would curtail opportunities for cultural and commercial exploitation, while still providing an educational experience. Unfortunately, measures to minimise ancestral harm still often stand at odds with the purist ideologies of allowing the dead to rest that are increasingly gaining traction in modern times.

Simultaneously, in North America, Native American populations continue to express outrage and grief at the actions of white Americans towards the remains of their forebears. Grave robbing of Native American burial grounds is still tragically common practice within some pockets of American society. Individuals usually keep these human remains or sell them to collectors’ shops where they are put on display.

Moreover, earlier this year, the Peabody Museum of Archaeology in Massachusetts, USA, was challenged by the Association on American Indian Affairs for continuing to keep collections of Native American human remains and cultural objects in storage.

The Association penned a letter to the institution and its associates, citing their violation of The Native American Graves Protection and Repatriation Act (NAGPRA). It details the experience as traumatic and damaging to the communal psyche, saying: ‘‘[The institution’s failings] has caused continuing physical, emotional and spiritual trauma to Native Nations and their citizens.’’

The letter went on to state: “This is Harvard asserting that its property rights over stolen cultural heritage are more important than healing the Native Nations that have been injured. Harvard’s decision forced those Tribes to replicate and hand-make those items to provide them back to the Ancestors upon reburial – triggering more historical trauma.” Indeed, such violations serve as a reminder of a turbulent and painful history of imperialism that totally disregards the affected communities.

Current debates about repatriating and reburying human bones and organs speak to a wider emotional struggle subsumed in generations of intangible loss and grief. In such establishments of learning, human remains transform from remnants of once existing beings to anthropological and scientific curios. This has left affected communities perturbed by a profound sense of injustice, which may only be rectified through the return of beloved bodies.

Many of the museums adhering to requests for repatriation are realising that the museum is ‘not a proper place’ to keep such ‘material’. Academic discourse on the subject often makes this debate more matter of fact. It is also partially void of the emotional knowledge that should inform their reasoning for going ahead with displaying bodily remains. Navigating such detached reasoning brings concerns over who these displays benefit to the forefront.

Can we place the further enrichment of Western knowledge bases over the collective spiritual, emotional and social wellbeing of historically side-lined cultures?  A further collaborative effort to understand the sensitivity and sacredness surrounding their concerns is essential to strike a balance.