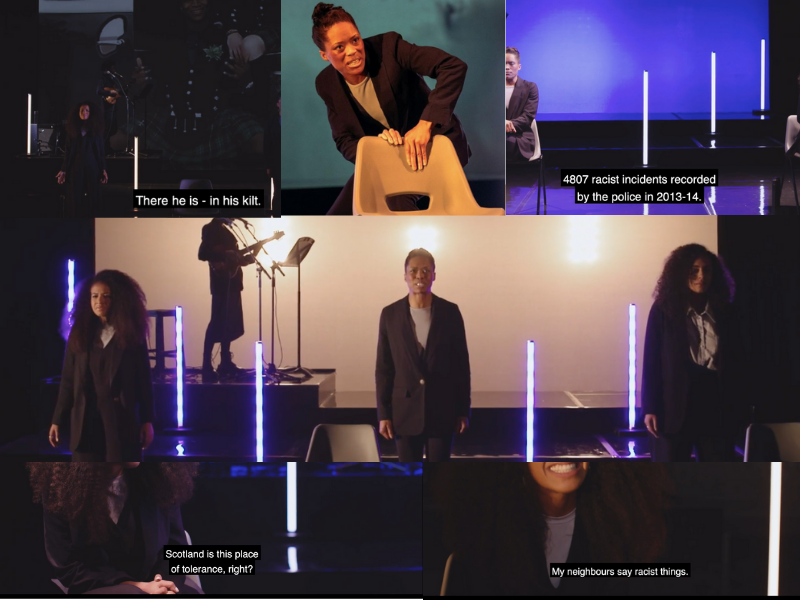 Lament for Sheku Bayoh: ‘A collective grief so profound…’

Lament for Sheku Bayoh: ‘A collective grief so profound…’

What does it mean for a nation when its nationalism leaves so many so exposed and so unprotected?

Hannah Lavery’s Lament for Sheku Bayoh conveys a collective grief so profound – it disrupts the idea of belonging and destabilised the assumption that Scotland possesses a friendly and welcoming nationalism.

Sheku Bayoh’s brutal death in police custody raised questions about accountability in the force, and for many, displaced trust in the justice system. On May 03, 2015, in Kirkcaldy, police responded to reports of a Black male carrying a knife. The police arrived on the scene in a frenzy with CS sprays. Multiple officers held Sheku down until he was unconscious. He later died of his injuries in hospital.

The police claimed they reacted in response to Sheku attacking a female officer, but with further evidence the police’s claims were proven to be false. Nevertheless, in 2018, the Crown Office in Scotland decided that the officers involved would not be prosecuted.

Lavery demands that audiences wake up and lament for people like Bayoh – victims of race-based oppression.

The mythologising of Scottish history often presents the country as the harmed, often ignoring their ability to cause harm. However, this romanticised history where the nation was wronged by English rule, may obscure their complicity in British global oppression, including their participation and profiting from the slave trade. In this way, Lavery resists the notion of Scottish exceptionalism, debunking the view that all citizens have equal protection under the law.

Written and directed by the acclaimed and multi-disciplinary Lavery, the play was enhanced by the audio selection, visual design, and actors. Saskia Ashdown, Courtney Stoddart and Patricia Panther take up space on the physical stage and illuminate Lavery’s script with their physical gestures and emotionally resonant vocal performances. The set was produced and designed by Kirsty Currie, featuring lots of white light and shifting images being projected behind the cast. One of the most notable of these is an image of the late Bayoh dressed in his kilt with his friends, smiling.

Musician Beldina Odenyo composed the score accompanying the performance, her choices reflecting a desire for listeners to pay attention to the significance of the tragedy at hand.

Lament for Sheku Bayoh opens with Odenyo singing a song that references a notable Robert Burns poem known as ‘Is There for Honest Poverty’ or ‘A Man’s A Man for A’ That’. Singing the solemn tune with words like ‘The coward slave, we pass him by’, communicates Lavery’s willingness to discuss power dynamics and accountability. Overall, this initial a cappella performance sets the tone for the rest of the play, as a painful, yet necessary exploration.

Stoddart, Ashdown and Panther command the stage with a presence reminiscent of the all-knowing, emotionality of a Greek chorus. Dressed in black suits, the costume sets the tone for solemnity. In a sense, this simplicity of the costume allows for Lavery’s writing to occupy centre stage, just as much as their physical bodies do.

Language is a critical component of the play. As they speak, they bear witness to tragedy, their voices grappling with the dehumanising trauma of police brutality, the devaluing of non-white lives. But Lavery’s words ensure that they are not an easily digestible ensemble. This is not a trendy examination of social justice; it’s about the broken promise of a nation unwilling to grieve everyone within its borders.

Although the speakers’ alternating voices compete for the audience’s attention, miscommunication and mis-speak between the performers is a deliberate choice. What appears to be discord is indicative of the tension that defines the dynamics of racial belonging in Scotland.

They ask, ‘Who are we if we turn towards this/ Who are we if we don’t?’. Through this question Lavery suggests that while those who experience oppression are predisposed to injustice, white citizens often turn away, turn a blind eye, and withhold their sympathy. Several rhetorical questions like these prompts the audience to question the notions of the social progressivism they assume Scotland embodies.

Lavery’s Lament for Sheku Bayoh does not simply address a 2015 tragedy, it seeks liability in a Scotland too complacent in their vision of social equality. It urges a nation to confront the violence lurking beneath their social priorities.

By blending the voices of the traumatised and unscathed, Lavery dares to negotiate the moral complexity of a nation where things are not as progressive as they seem.

The truths contained in the play’s content are both imaginative explorations of conversations between citizens who possess different levels of social power. The performers debate about the role of the police, about accountability, and who is afforded the opportunity to play devil’s advocate in matters of social injustice.

The performance delivers brutal honesty about the injustice that shapes police interactions with Black men. The performers lay out the gruesome physicality of Bayoh’s murder: ‘Knee on spine. Rib cracking, some craic.’ Their blunt description and short sentences explore the issue of such violence being routine and swift, evidence of the bigotry that destroys naïve visions of a tolerant, inclusive Scotland.

Lavery’s Lament for Sheku Bayoh does not simply address a 2015 tragedy, it seeks liability in a Scotland too complacent in their vision of social equality. It urges a nation to confront the violence lurking beneath their social priorities. What’s more, it forces the audience to wrestle with, and attempt to swallow the horror of their nation not being the socialist utopia that it hopes to paint itself as.

To attain a better future, Lavery argues that Scotland’s moral dilemmas must be unravelled and laid bare. Lament for Sheku Bayoh asserts that Black pain cannot be ignored. The audience is invited to reflect, grieve, and act on social inequalities that have been buried for far too long.

To this day, the involved officers have not been charged, despite more evidence that suggests that they escalated the interaction. According to a BBC Scotland documentary, Sheku Bayoh had 23 separate injuries from the incident. These included a ‘cracked rib, head wounds consistent with baton strikes, and burst blood vessels in the eyes – a possible sign of suffocation’.

The production was not simply moving, it stirred a sense of frustration and urgency in me. I cannot begin to imagine the depth of sorrow Sheku’s loved ones must feel to this day. They have somehow found a way, despite their grief, to implement focused action and activism against the shortcomings of the justice system.

The events of that day cannot be reversed. In Lavery’s words, ‘The dead cannot answer back, but Sheku’s family will, for him’. Perhaps for now, art that celebrates his memory can make a home for people’s collective grief.