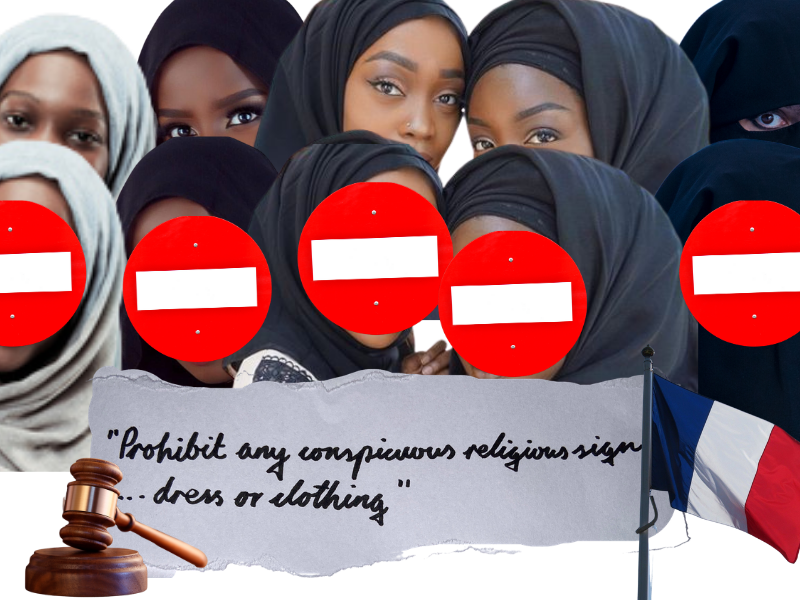 #PasToucheAMonHijab: How France is Erasing Muslim Women and Girls from Society

#PasToucheAMonHijab: How France is Erasing Muslim Women and Girls from Society

Once again, France has unleashed new levels of Islamophobia, but I prefer to use the term anti Muslim hatred. Calling it Islamophobia places the onus on Muslims who fall victim to it, rather than those who perpetrate it. Viewing Islamophobia as a phobia completely disregards the experiences of Muslims that unfortunately experience prejudice and hate on a regular basis. Governments and institutions use the term ‘Islamophobia’ as an easier way to target Muslims by the constant surveillance and censorship of Muslim people. For instance, in February, the Dutch Parliament decided to monitor mosques due to a “foreign influence”, when in reality they are curbing the civil liberties of Muslims who are literally just practicing their religion, like any other religion. Unfortunately, the British government has somewhat successfully managed to create fear around the Muslim community, allowing them to implement oppressive and racist policies and strategies such as Prevent, that aims to counter extremism but instead targets Muslim people.

Whilst this isn’t unique to France, other European countries such as Belgium and Switzerland have been notorious for interfering with the rights and humanity of Muslim women and girls that choose to wear their hijabs, niqabs or burqas.

Just days before the Muslim holy month of Ramadan, the French Senate voted to approve Macron’s separatism bill and if this unfortunate bill becomes a law, Muslim girls under the age of 18 would be banned from wearing the hijab in public spaces and Muslim mothers who wear the hijab would be banned from accompanying their children on school trips. Forcing someone to remove their hijab, just like forcing someone to cover, is wrong and limits their agency. Some may argue that the French law may try to ‘liberate’ these women and girls in the eyes of Western imperialism due to the harmful representation of Islam and Muslims, yet this is in no way liberating. The irony of France’s national motto being ‘liberté, égalité, fraternité’ is laughable because this current bill, their previous and current legislation about hijab and their entire colonial history never abided by liberté, égalité, fraternité when they were oppressing countries in West and North Africa and the Caribbean.

As Muslim women and girls, the hijab is worn as an act of ibadah (worship) and it’s very common for young girls to wear their hijab once they feel more confident and ready to cover their hair. To strip away the autonomy of a young girl, experiencing puberty is wrong. What is France’s obsession with Muslim women and girls that choose to cover up? It is simply rooted in misogyny, colonialism and racism, assuming that women and girls don’t have the agency to choose for themselves and practice their religion.

Hasidic Jewish women wear a tichel, Catholic nuns wear a veil but it’s the hijab that the French government has an issue with.

It’s a law against Islam, not just the hijab. The bill also acts as a form of control and regulation over women’s bodies. Meanwhile the age of consent in France is 15 years old. Considering that the majority of Muslims in France come from West African and Arab backgrounds, it is clear where the racial element comes in.

In 1989, three teenage girls in Creil, a town in France were expelled for wearing their hijabs in school, which went against the secular nature of the country. In 2004, the hijab was banned in French public schools. In 2011, Nicolas Sarkozy banned the niqab (face covering) when I was 9 and upon reflection, I realised the hatred people had for Muslims, given the rampant notions associating Muslims with terrorism following the killing of Osama Bin Laden. Now, a decade later, almost everyone is wearing masks and covering faces but the niqab is still banned and punishable with a fine and French citizenship education. As noted by Yasser Louati, French human rights activist, “2004 was the opening of the Pandora Box when Islamophobia became a legal form of discrimination and not just an opinion.”

For those of us familiar with France’s history of colonialism, laïcité and racism, their views about the hijab isn’t a new phenomenon. The best translation of laïcité is the separation of religion and state, ensuring that religion is practiced privately, enacted by law in 1905. Yet this is problematic because Muslim women and girls that wear the hijab are public manifestations of their religion. Rather, laïcité can be viewed as way of regulating religion, mainly Islam. Western saviorism has been institutionalized to the extent that when Algeria was colonised, Algerians were offered citizenship if they left Islam. During Algeria’s resistance against French colonialism, the niqab was crucial as a form of resistance, reminding us that our feminism must be decolonial.

Martinican scholar Frantz Fanon once wrote about how France maintains their brutal acts of colonialism through gender and noted:

“If we want to destroy the structure of Algerian society, its capacity for resistance, we must first of all conquer the women; we must go and find them behind the veil where they hide themselves and, in the houses, where the men keep them out of sight.”

To destroy the fabric of Algerian society, the French tried to destroy the women’s relationship with their niqab. When in reality, the niqab was instrumental for freedom against oppression. During the Algerian War of Independence, mass unveilings occurred and the wives of French military officers unveiled Algerian women as an ‘emancipatory’ act. Following these forced unveilings, many Algerian women began to wear the niqab as an act of resistance, to define liberation for themselves.

Lallab is a French feminist and anti-racist organisation that is run by Muslim women for Muslim women, amplifying their voices and defending their rights. As France and Europe become increasingly right-wing, my hope is that things get better for Muslims in France, especially as they have the largest population of Muslims in Europe of an estimated 5.7 million. France’s actions are not new, it’s in their colonial DNA and we must stand in solidarity with our Muslim sisters impacted by institutionalised anti-Muslim hatred.