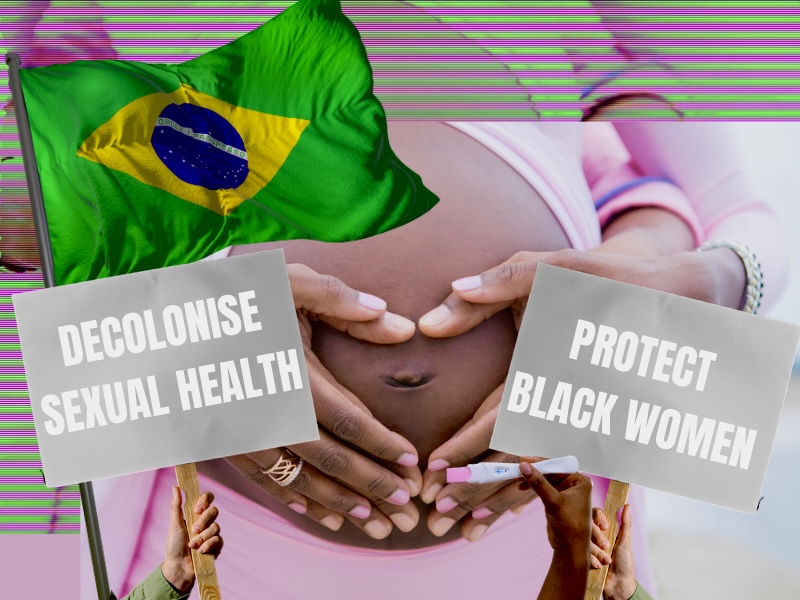 Current sexual and reproductive health (SRH) policies exclude the narratives of non-white women. Coupled with the threat of climate change, we see how these policies continuously impact the world’s poorest regions who contributed the least to climate change. In particular, the United States, being the global hegemonic force, has left women in Brazil and Latin American countries such as Colombia with limited access to support and care for their sexual health and reproductive rights. Whilst women across the world are protesting and advocating for their reproductive rights, it’s important to understand how imperial powers play a role in the battle for fair sexual and reproductive health policies.

For centuries we have seen how Black Women have been affected by the lack of concern for our health, be it the horrifyingly high maternal mortality rate at the hands of medical negligence or the history behind gynecology. Due to the proximity between the US and Latin America, Afro-Latinx women are restricted in their reproductive rights. Not only are the US involved, but neoliberal policies during many Latin American revolutionary movements contributed to the difficult sexual and reproductive health policies which impact women today.

Global organisations such as the International Monetary Fund and World Bank in the 1980s ensured countries in the Global South reduced their public spending for social services such as healthcare and instead privatised parts of their economy in order to gain further loans. Decades later, poorer women who predominantly come from Afro Latinx backgrounds still bear the brunt of these neoliberal policies as the white middle class Latina women can access maternal healthcare and sexual health care through private services. Furthermore, as a predominantly Catholic region, the Catholic Church has had a great influence in maintaining their moral views concerning abortion and contraceptives.

Across the region, elective abortions are only legal in Argentina, Guyana, Uruguay and two states in Mexico. In Brazil, abortion is a crime, unless the pregnancy is a result of rape, or risk to the mother or fetus’ life. In the country, Black Women are twice as likely to die from a termination of pregnancy than white women- largely due to economic factors. For Afro-Brazilian women, abortion services often take place in non-medical environments because they do not have the social nor economic capital to afford to travel to a country where it is legalised, nor know any doctors who could carry out the procedure for them safely. As a result, Afro-Brazilian women are less likely to have access to anesthesia or pain relief and can find themselves at high risk of infection or hemorrhaging.

As Latin American tensions rise at the hands of US imperialism, many women are unable to access adequate sexual health care or even access safe abortions. The global gag rule, alternatively known as the Mexico City Policy, was introduced in 1984 by former Republican President Ronald Reagan, which meant that any NGO receiving funds from the US Government to improve healthcare services can’t perform legal abortions or advocate for abortion reform. The only exception for abortions are if the parent’s life is at risk, rape or incest.

Following Biden’s presidential win, the global gag rule was rescinded on January 28th, yet this is just a mere short term solution to a long term problem that has been occurring for decades. The US should not be a leader in global sexual health and reproductive policies when women in their own country are at risk of losing their abortion rights or access to quality sexual health care, let alone another country. Despite this, Afro Latinx women are still at risk of death when unsafe abortions are performed.

In predominantly Black majority Latin American countries like Brazil, female sterilisation was very common in the 1970s and 1980s and of course, racial and class differences contributed to what type of woman would undergo sterilisation.

Whilst abortion legalisation and female sterilisation aren’t distinct, both practices have denied Afro Brazilian women’s bodily autonomy for decades, especially in comparison to their white counterparts. For instance, the practice was introduced in the 1970s amongst the white, middle class demographic and illegally spread to the Black, working class masses. However, the dynamics differ as often these illegal sterilisations were used as electoral exchanges for the poorer women who were unable to undergo a legal sterilisation.

However, in the late 1980s and the beginning of the 1990s, the movimento negro criticised the sterilisation practice and spoke out against it. The Movimento Negro Unificado was founded in Sao Paulo in 1978 and was a major Black activist movement in Brazil challenging racial and class discrimination. It was estimated that 25 million Brazilian women were sterilised, with the majority of women coming from the poorest regions. In 2001, Brazilian sociologist Ana Maria Goldani noted that: ‘Brazil’s women’s movement and Black Women in particular denounced sterilisation as part of a deliberate international conspiracy, supported by national elites and medical interests, to control the growth of poor and non-White people’ yet it was also noted that the racial motivation behind these sterilisations were difficult to prove.

Despite this, the movimento negro continued to critique the Brazilian government and international organisations who seeked to control the birth rate of Afro Brazilian women en masse by enabling the use of sterilisation amongst the Black population. Following this, the struggle of the sterilised women led to the creation of the Parliamentary Committee of Inquiry (CPI) in 1991, which found out that private institutions financed such contraceptive methods, especially in the poorest regions of Brazil.

The aim to regulate the reproductive rights of Afro-Brazilian Women is just another example of how racism has been institutionalised in Brazil. These discussions about sterilisation amongst the movimento negro contributed to the development of Afro Brazilian feminisms.