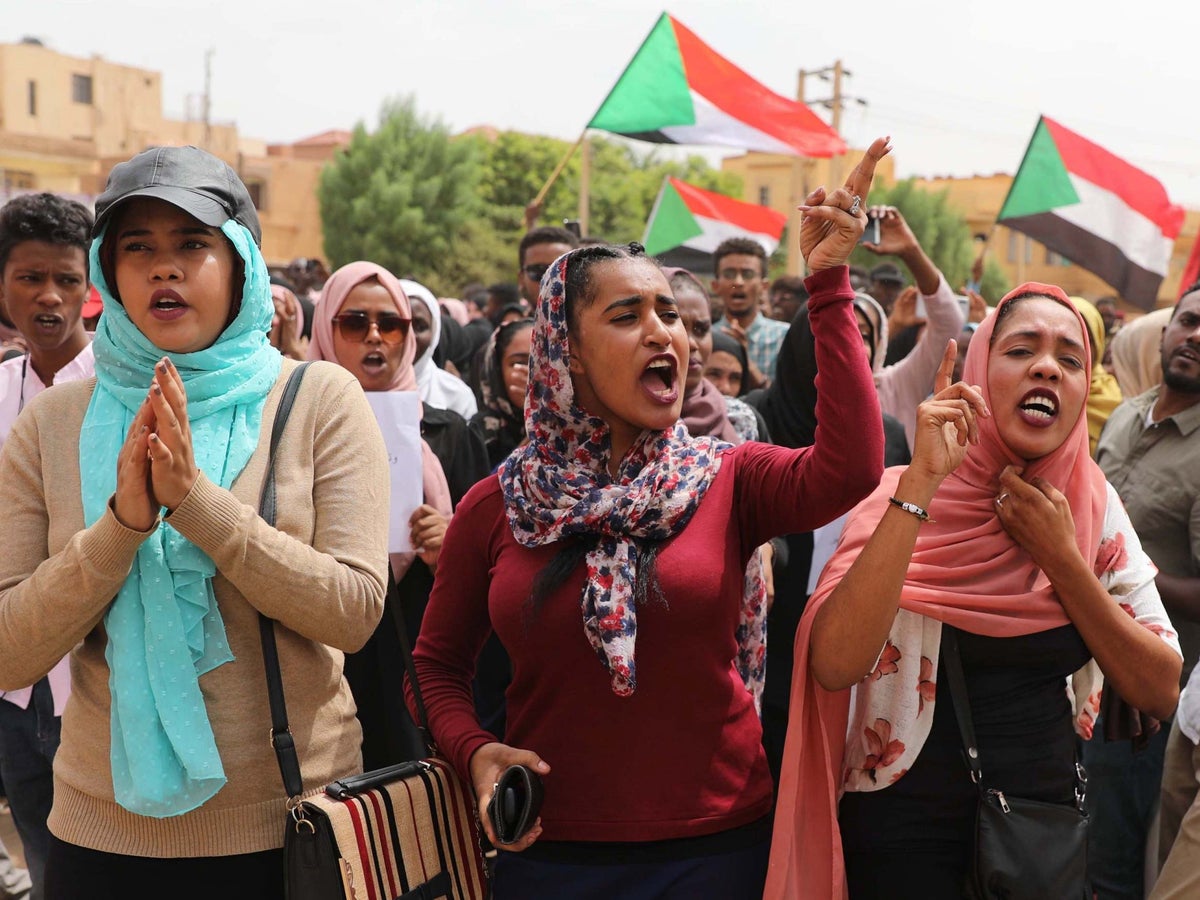 In 2019, a video of Sudanese activist Alaa Salah leading a group of protesters in revolutionary chants took over international media. Salah, standing on a car wearing a toub, the Sudanese traditional dress, became the symbol of the revolution and the world’s wake up call to the Sudan Uprisings. In these protests, civilians were fighting for freedom of speech, freedom of cultural expression, and basic human rights. The Sudanese people peacefully protested against skyrocketing inflation, an ongoing economic crisis, and an epidemic of unemployment and corruption. They had survived decades of governmental neglect and violent government militias waging civil wars in different corners of the country. Their Uprising ended the autocratic reign of a leadership that isolated and stigmatised Sudan internationally as a country and as a people. Within eight months, dictator Omar Al Bashir was ousted, and a Draft Constitutional Declaration signed, initiating a planned 39-month phase that should turn Sudan into a civilian-led country. Currently, it is undertaking the “2019-2024 transition to democracy”; executive power is shared by a mixed military–civilian collective head of state, the Sovereignty Council of Sudan, headed by civilian prime minister Abdalla Hamdok and a mostly civilian cabinet. Judicial power has been transferred to Nemat Abdullah Khair, Sudan’s first female Chief Justice. Khair’s appointment is seen as a milestone not only for Sudan, but for Africa, as the number of female Chief Justices is exceedingly low across the continent.

The stories of Sudanese Women shed light on the country’s paradoxical history with female empowerment and oppression. During the Uprisings, reports confirmed that amongst the protesters, at times more than 70% were female, even though Women are in the most dangerous and vulnerable positions when participating in protests. By virtue of being born into a female body, they are disproportionately affected by the oppressive regime and its conservative systems. Their fight against Bashir’s dictatorship included struggling against gender discrimination and gender-based violence perpetuated by both the regime as well as ‘by their own men’. Young Women held the biggest stake in the struggles. During that time, the term Kandaka was revived to honour the strength and courage of female protesters. Kandaka translates to “strong Woman” and is the title used for warrior queens in the ancient Kingdom of Kush. Reviving this Kushite heritage while contemporary history was unfolding served as a reminder that Women’s vital roles in the Uprisings were simply an extension of a legacy of strong Sudanese Women shaping public affairs: In 1946, ten years before independence, the country’s first female doctor Khalida Zahir protested against British rule and was consequently arrested and flogged. Similarly, Fatima Ahmed Ibrahim, the first Sudanese and African Woman in parliament, protested at the age of 14 when the British colonial government cancelled science classes for girls. Current Chief of Justice Khair, herself a Kandaka of the Uprisings, follows in their footsteps, facing an overwhelming apparatus designed to subordinate and limit half of the population.

Rally of the No Oppression against Women Initiative celebrating the 16 Days of Activism Against Gender Violence, December 16, 2019 (RD)

Despite efforts to end government enforced discrimination and ensure legal safety, post-revolutionary Sudan is witnessing an increase in sexual, verbal, and physical crimes against Women

Sudanese Women are the mirror of the injustices and discriminatory nature of Sudan’s legal system. According to the No To Women’s Oppression group, before the revolution, between 40,000 and 50,000 Women were arrested and flogged every year by public order police because of their clothing. Sudan’s infamous Public Order Laws had been used since the 1980s to control and intimidate Women by way of punishing them for “indecent acts” in public, such as wearing “obscene outfits” or “causing an annoyance to public feelings”. In this transition phase, female politicians have been trying to tackle gender inequalities, for example through abolishing the Public Order Laws and legally criminalising Female Genital Mutilation (FGM), but female participation in government is rare and difficult.

The Constitutional Document of August 2019 guarantees 40 percent representation to Women in the 300-seat Legislative Council, still to be formed. This is an increase from the previous representation quota of 25 percent, which was set during the former regime. However, critics warn that these first steps will not be followed by substantial efforts to include Women in all fields of society. Despite efforts to end government enforced discrimination and ensure legal safety (there is no law against marital rape, as we were reminded through Noura’s case), post-revolutionary Sudan is witnessing an increase in sexual, verbal, and physical crimes against Women.

After the romanticisation of Sudan’s ancient feminist past and celebrations of female power, patriarchy is trying hard to convert the Kandakat of the revolution into nothing more than a pretty symbolism

Realities of Women based outside the capital are dire. The coordinator of the Women’s Groups for Peace and Security, lawyer Azza Hasan, said that “the revolution came to change concepts, but so far there has been no change.” Two years in, after the romanticisation of Sudan’s ancient feminist past and celebrations of female power, Women are given little space to speak. They have thus far been systematically excluded from the lists of nominations whether it is for peace negotiations or state governors. Instead, patriarchy is trying hard to convert the Kandakat of the revolution into nothing more than a pretty symbolism, stubbornly neglecting the fact that Women’s issues are central to Sudan’s democratic development, especially with regards to peacebuilding, the economic crisis, and legal reform.

In Sudan, most people have been living by the rule that the more they disconnect their life from the state, the better. As is the case in most dictatorships, citizens lacked faith in the government. People who wanted change knew that they needed to enforce it themselves through generating community support in the absence of a social welfare state. With the spirit of the revolution offering hope for actual systemic upheaval, they are now taking this long-established DIY approach and using it to demand change. The main Uprisings may be over, but Women are still protesting all over Sudan, knowing that if they do not do it themselves, no one else will. Anticipating that patriarchy would “thank [Women] in demonstrations and forget about [them] in negotiations”, activists formed the alliance “MANSAM”, or Women of Sudanese Civic and Political Group, made up of eight political women’s groups, 18 civil society organisations, two youth groups and individuals.

“We, the women of Sudan, know that we are not free, nor are we equal citizens in the eyes of the state.”

Alaa Salah leading a group of protesters in revolutionary chants, 2019

Collectively, they have been pressuring government bodies to centre Women’s rights on their political agenda, repeal violent laws, and adopt international standards for human rights, such as the Convention on the Elimination of All Forms of Discrimination Against Women (CEDAW). On April 8th 2021, hundreds gathered in the capital Khartoum to rally against domestic and gender-based violence in Sudan. They read Sudan’s first ever Feminist Manifesto, stating that “We, the women of Sudan, know that we are not free, nor are we equal citizens in the eyes of the state.” This statement was born out of an initiative through which over 250 activists received training in Women’s political participation. Its inclusivity mirrors Sudan’s diversity, placing special importance on the divide between urban vs. periphery, and raising awareness of discriminations that are exacerbated by some Women’s ethnicities. Ultimately, their goal is for all Women, from city residents to remote villagers, to have the opportunity to become familiar with the agenda and be engaged in the discussions about the next steps.

During the Uprisings and since then, most of the Sudanese that keep us informed are Women, from Sara Elhassan to Yousra Elbagir to Nesrine Malik. Women reporters engage and educate the rest of us in the diaspora, and Women artists like Enas Satir and Alaa Satir visualise the revolution and ongoing transformation processes to keep everyone encouraged. Simultaneously, initiatives like AMNA are working to end violence against Women and girls (VAWG) by supporting survivors and educating civil society. They “mobilise individuals, diverse communities and agencies to create safer environments for Women in Sudan” and advocate for the de-stigmatisation of taboo topics such as menstrual hygiene or abortion. Projects like these, established and led by Young Women, are meant to assist the authorities on their slow walk towards gender equity. In reality, they are the force stirring Sudan into a better future for all.

Header Image: Women made up a majority of demonstrators at the protests that swept Sudan’s capital in December 2018 (EPA)