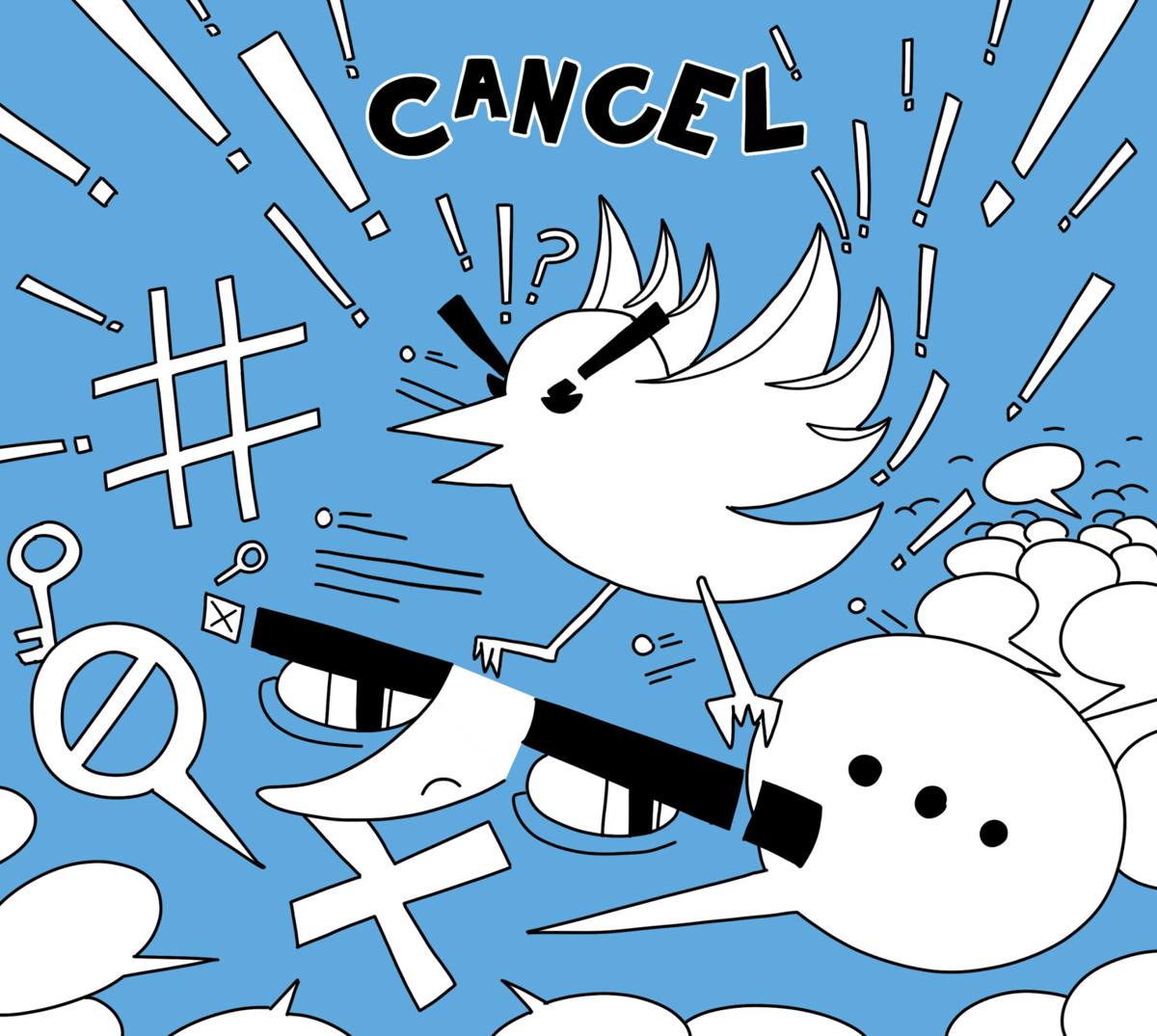 The past decade has seen the rise in social media as a space for policing and critiquing language and behaviour. Perhaps the most prominent examples of mass disapproval on the internet come from the Twitter-dubbed phenomenon of ‘cancel culture’: a form of social media activism that works to hold public figures accountable for perceived wrongdoings. Groups ostracise and denounce a figure by way of public shaming for their unfavourable or damaging behaviour (past or present).

A good example of this in action was witnessed when writer Chiddera Eggerue (more widely known as The Slumflower) accused fellow writer Florence Given of plagiarising her latest book. Erupting in December 2020, this conflict saw thousands of followers flock to both writer’s social media accounts demanding acknowledgement and accountability. The struggle between Eggerue and Given is very much a monetary one, though it also points to some of the publishing industry’s failings.

The act of ‘cancelling’ is one wielded against individuals or brands in positions of power and influence by members of the digital proletariat, if you will. Indeed, the very existence of this phenomenon is a direct reflection of the democratisation of information in the age of the internet. Such occurrences create a subversion of traditional power dynamics we see in more conventional media, where the 1% controls narratives and perceptions. This is what happens in theory but in practice? We often see instances of those in the public eye from more institutionally marginalised groups, such as Black Women, subject to disproportionate levels of admonishment. Furthermore, even when those in positions of privilege are truly held accountable, conversations can typically descend into excuses to be bashful and bully rather than be productive in enforcing change. This leads to a culture of harm more than it does growth.

The aforementioned predicament between The Slumflower and Given resulted in an intensely polarising exchange tackling feminism and racism and privilege, which saw Given part with social media for a time before returning with a statement. While The Slumflower initiated the call to have Given cancelled, the pillory by their respective followings is a prime example of how influence is wielded over users in an attempt to achieve justice by attack. This is something cancel culture has become increasingly adept at executing.

As The Slumflower’s accusations of plagiarism against Given went viral, the matter became racialised – some argue to an absurd degree. The Slumflower evoked the language of reparations to martyrise herself within her campaign, which many found opportunistic and insensitive to the historical struggle for collective racial justice.

One Twitter user tweeted: “this individualisation of reparations to just demanding random white people fund your lifestyle is reductive and offensive to victims of transatlantic slavery and their descendants”.

Cultural researcher Suzanne Alleyne explains communication as a transaction of power and how this affects levels of empathy. It is the idea that conversational exchanges influence others by drawing on the amount of authority we have in a social space, i.e., social media. Alleyne observes a trend where the more power we have, the less empathetic we become. We see this thought process in instances of public shaming as a means of de-platforming prominent figures. The power of collective cognisance drives a ‘mob mentality’ that’s able to overpower those with individually higher socio-economic standings, such as celebrities and influencers.

Prioritising audience reach as opposed to encouraging meaningful conversation, however, is just one way that cancel culture stifles affirmative action. Whilst outrage is understandable, it can also hinder much-needed communication. Last summer, Nella Rose was accused of being anti-Black and colourist for shaming dark-skinned Black girls in tweets she had posted seven years prior as a teenager.

While much of the response to her tweets was constructive, some took it as an opportunity to body shame and perpetuate even more problematic behaviour.

One Instagram user said: “How can you say so much about black/ somali [sic] people when you are shaped like a cereal box.”

We also need to place Rose’s comments in the context of her being a young dark-skinned Black girl herself at the time of tweeting. Given her own place within the white patriarchal hierarchy, we need to evaluate how much social and cultural capital this person has to induce harm before considering how we hold them accountable in an effective way. Rose later took to YouTube to explain her thought process at the time, disclosing feelings of insecurity and projection while battling internal discrimination as a member of the group she was ridiculing in her tweets. This, obviously, does not excuse her past behaviour, but noting these factors does allow us to move forward in the most future harm-reducing way possible, which should be the prime aim of holding people to account.

“Editors are fired for running controversial pieces; books are withdrawn for alleged inauthenticity; journalists are barred from writing on certain topics; professors are investigated for quoting works of literature in class; a researcher is fired for circulating a peer-reviewed academic study; and the heads of organizations are ousted for what are sometimes just clumsy mistakes. Whatever the arguments around each particular incident, the result has been to steadily narrow the boundaries of what can be said without the threat of reprisal. We are already paying the price in greater risk aversion among writers, artists, and journalists who fear for their livelihoods if they depart from the consensus, or even lack sufficient zeal in agreement.”

We need to re-assess the purpose of ‘cancelling’ and decide whether we’re seeking justice or revenge through this form of social reckoning. When these measures serve to invoke even more harm, nobody benefits beyond enjoying 15 minutes of crude ‘entertainment’ and spectacle at someone else’s expense.

Co-Written By: Lauren Johnson – a freelance writer with a profound interest in culture and behaviour. Her work focuses on culture, lifestyle and the state of society. Connect with her on Instagram and her blog

Co-Written By: Our Commissioning Editor Hannah Uguru – who is an award-winning writer who is passionate about discussions centring Black Women and the nuances within this identity. Connect with her on Instagram and on her blog.

Header Illustration by: Alex Bosserman for the Daily Titan