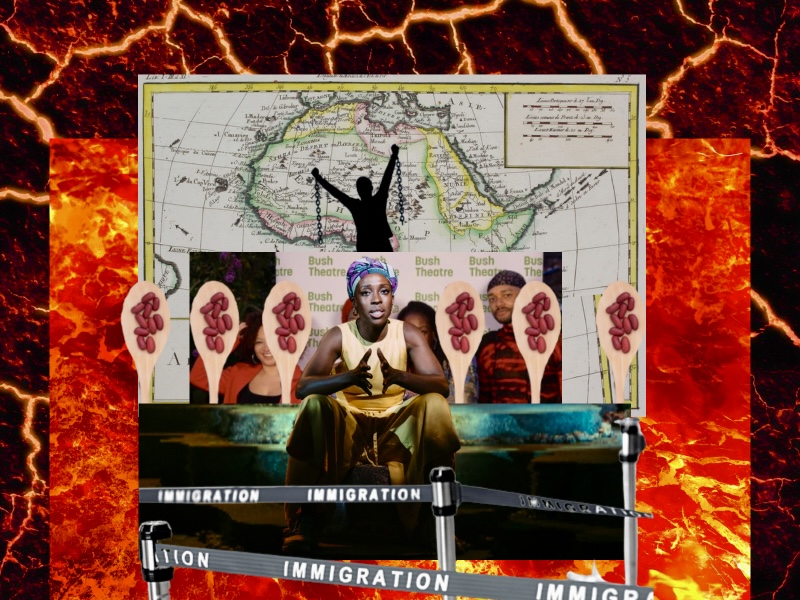 Lava: A Stellar and Charismatic Display on the Importance of our Names

Lava: A Stellar and Charismatic Display on the Importance of our Names

At its core, Lava is a play about race and identity – but it’s much more than that. Intricately told in 85 minutes, we learn Her story, of being an African immigrant, exposing medical racism and ending with the iconic Karolina, by soukous musician Awilo Longomba. It was an unexpected close – but it was the perfect fit for the play, sharing the vibrancy of the Congolese people.

Oozing self-confidence and boldness, British Nigerian actress Ronkẹ Adékoluẹjo, commanded the stage with her energy. From the play’s opening dance sequence to the notorious WAP challenge, the Zanku and many more, Adékoluẹjo brought the crowd alive with her talent.

I’m not exactly certain whether it tells the semi-autobiographical story of the Congolese playwright, Benedict Lombe, but Lava reminded me of the importance of African names – the trials, and tribulations of being an African immigrant and how we’ve come so far but still have such a long way to go.

Leading the monologue, Her (as she is called in the play), is a twenty something year old Woman, who as a South African national applying for a British passport, soon realises that her South African passport doesn’t feature her name. After learning about her life, we come to find out her name is Benedict Lombe – just like the playwright.

Dealing with the Home Office comes with endless frustrations, an all too familiar experience many African immigrants go through. Her goes on to tell the audience in the most compelling way about the infamous ‘suitcase’. You know that suitcase where all your family’s passports, birth certificates and other confidential documents are buried. Yeah, that one. It was these little moments of nostalgia that played on my emotional strings even more.

Whilst separating kidney beans with her mother, Aunty tells the story. We trace her journey back from the beginning and learn the complexities of her name. As a 26-year-old, Her never once asked her mother about her identity – Aunty had been waiting for this conversation to be initiated for ages, but she never did. And just like that, Adékoluẹjo switches, putting on a Congolese accent to imitate her mother – we also discover the history of Congo, the birthplace of Her.

We learn about the rivers of blood, after Leopold’s genocide of 10-15 million Congolese people and further European colonial influences. And of course, what’s a story about Black history without slavery?

Despite this, what made this play even more intriguing was the funny and relatable pop culture references – which injected some much needed humour to mask the not so positive re-telling. Comically, she notes that the Congo has had more names than P Diddy, whilst listening to her mother’s lectures on colonialism, resistance and Mobotu. Through empire, colonialism, war and apartheid, Lava spans continents, taking us from the Congo to modern day South Africa, to Ireland via Wigan and finally, London. Importantly, we learn that her name was a form of resistance, dignity and it mattered because it was not allowed to exist back then as the Mobotu regime banned Christian names.

Wondering why the play was called Lava, I presume, it’s because of the exasperating experiences at the Home Office, to living in South Africa as a Congolese girl, to the stress of moving to Ireland and then England, and ultimately the trauma of colonialism – it’s no wonder the lava of one’s emotions would erupt.

In South Africa, her father was almost a victim of a xenophobic attack. In Ireland, she was judged by her teachers’ for being the palatable Black girl, the ‘good’ kid who wasn’t like the other Black kids. She battled stereotypes from everywhere. Adékoluẹjo brings this spirit to light, channeling every sentiment, and as a member of the audience, you can feel it – and coming from an African immigrant family, I felt it, it was palpable.

“What’s it like having a Black girlfriend?” Ah. This line was carefully crafted and intentional, changing the dynamic from the personal to the political because what does it mean? Are you asking about the politics of being with a Black girl when it comes to our hair and racist encounters, or are you asking whether Black girls are exotic creatures and not humans that bleed red like you?

Her boyfriend, who she met in a meet cute (a meet cute is a scene in which the two people who will form a future romantic couple meet for the first time), was constantly asked this question and Adékoluẹjo brings it to justice, performing as him. Coming back to the present, Benedict can no longer hold this annoyance and the accompanying pain she feels in her stomach. Pain from the resentment, the racism, the microaggressions. The lightning in this scene was crucial to the story – red lights flashing everywhere when the dismissive white doctor kept turning her away. It was a minor but powerful scene, reflecting the state of Black Women’s healthcare – sounding the alarm on how Black Women are constantly ignored and rarely taken seriously, because of our perceived strength. The remarkable thing from this scene, was my immediate arresting thought – was it a physical pain or the mental torture that manifested and affected her body? It was so powerful yet saddening to see how our bodies bear the brunt of racism.

Lombe’s film, ‘Do You Hear Us Now?’ was projected onto the back of the stage, inviting the audience to consider why Black pain should be artistically articulate, insightful, or poetic. Displaying the vibrancy of Black joy, dancing, singing, and celebrating the global Black Lives Matter protests, Lombe and Adékoluẹjo do a stellar job of ensuring this is a play for everyone. More than race, more than identity, it reminds us about the importance of our names and the stories we carry in them.

Lava will be streamed online from August 16th – 21st. Book your tickets here

Review Written By: Bashirat Oladele – a freelance writer who enjoys writing about pop culture, entertainment, and politics. Her work has been featured in Teen Vogue, Stylist, Cosmopolitan and other publications.