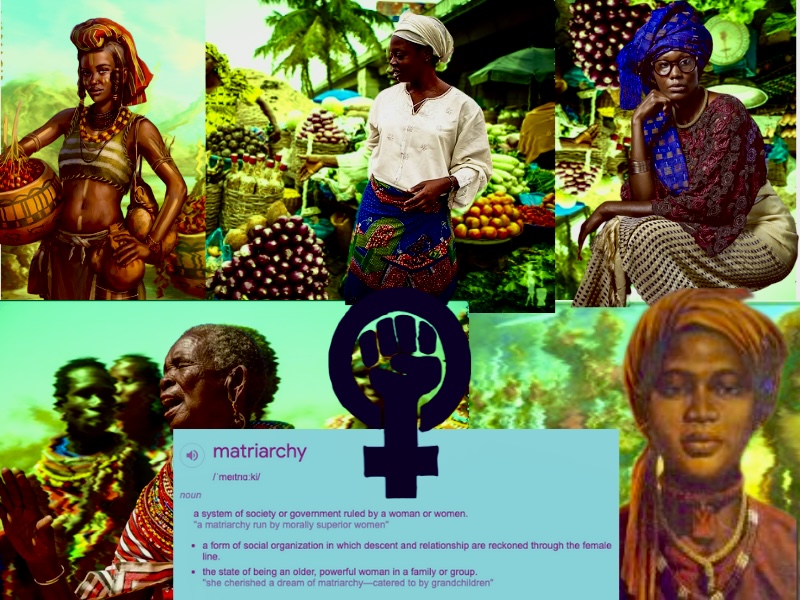 The Myth of Matriarchal Africa

The Myth of Matriarchal Africa

“Before the colonists came, Africa was a matriarchy. There was no such thing as patriarchy – in fact, patriarchy was brought by the white man.” Wrong. “I thought Africa wasn’t a monolith.” True, but misogyny is universal and is the earliest form of discrimination. Perhaps, the connotations of a “Mother Africa” implied the association of a matriarchy.

It’s frustratingly common to see such myopic and ill-informed narratives of precolonial Africa on social media. Due to the nature of oral tradition across the continent, there can often be difficulty in identifying the histories of pre-colonial African societies.

When we consider how European imperialism manifested itself throughout the continent in the form of artificial borders, it makes it even more difficult to access data from non-Anglophone regions, as most of the data concerning pre-colonial Africa are mainly in English and by extension, can exclude the narratives of Lusophone and Francophone regions.

Speaking to the visionaries – Astrid and Chinny – behind the ‘It’s A Continent’ podcast, it was clear that many Black people across the diaspora have “romanticised Africa” and it’s easy to do so because of the lack of information on the continent prior to colonialism. It’s easy to think amid the historic and current atrocities that things weren’t bad, and it was a utopia for Women. More than likely, African Women and girls still suffered from patriarchy.

For instance, beading is a tradition amongst the Samburu people of Kenya where older men rape underage girls, some as young as 6, and a close relative meets with the girl’s parents and offer her a necklace woven with beads of a man from the community. Once accepted, the beads are placed on the girl’s neck – highlighting how the older man is free to have sexual relations with the girl. Essentially, it’s believed that it will prevent girls from being promiscuous. Yet people will proudly proclaim that pre-colonial Africa was a matriarchy, when in fact patriarchy was booming back then, just like it is today. It’s harmful to erase the oppression of African Women and girls for the sake of an ego boost, when, African Women and girls still suffer today – be it from physical, sexual, emotional, financial and even spiritual abuse. By insisting that the continent was matriarchal, it gives men free reign to absolve their own responsibilities domestically such as chores and childrearing, considering how gendered the family is. If Africa was matriarchal, what were men doing the whole time?

During pre-colonial Burundi, “Umwami w’i Burundi was the ultimate supreme”, Women and girls were raised to serve men and get married at a young age. This isn’t unique to Burundi or even the continent, historically young girls were always forced to marry significantly older men and this wretched practice persists to this day, endangering millions of young girls globally. Female genital mutilation has been practiced in pre-colonial Africa and just like child marriage, it exists today and occurs in African countries such as Mali, Somalia, and Sierra Leone. Even Women such as Madam Yoko, a ‘leader’ of the Mende people of Sierra Leone, was an agent of patriarchy for the colonial administration by giving young Women away to men. Thus, adopting such a Westernised take about a “matriarchal Africa” is frankly ahistorical and arguably deeply insulting.

Instead of romanticising a matriarchal Africa, how about we recognise and magnify the stories of African Women who were forgotten…. you know, the ones who remembered the Women whilst African men were at the forefront of these anti-imperial movements. Chinny notes that “Queen Nzinga protected what we know to be modern day Angola from the Portuguese colonisers.” Oral tradition notes that she dressed in more ‘masculine’ clothes at the time whilst protecting her land to assert her authority. Despite having patriarchal concepts such as polygamous marriages, some Women held the position of “head wife”, giving them some autonomy. Furthermore, she notes that “often, the head wife would oversee the finances – for example – if they’re farming the land. But I think the problem with colonialism, is that it has shifted them away from agricultural production, favoring the need to be like the West. Their power was then taken away and I think that’s the problem.” She continues, “Even though there was to a degree, a form of patriarchy then, Women were able to get by, but it wasn’t perfect at all.”

Astrid importantly mentions the erasure of Women’s stories in pre-colonial and colonial Africa, noting that Bibi Titi Mohammed, a Tanzanian Woman, was hugely influential in the Tanganyika African National Union and led the Women’s branch of the group. Without Women like Mohammed, it would be difficult to envision an independent Tanzania. Instead, her story was erased from African history – unless you willingly researched the influences of African Women during their independence movements. Society sees Julius Nyere as the founding father of Tanzania whilst the identity of African Women like Bibi Titi Mohammed is hidden in the shadows. Indeed, Women created the face of Pan-Africanism – but gave men more face time. Without Mabel Dove Danquah and Bibi Titi Mohammed, would there have been a Kwame Nkrumah or Julius Nyere?

Furthermore, Chinny reminds me that society only remembers the men when it comes to liberation movements, hence why the constant praise for Kwame Nkrumah, Thomas Sankara and the like. In addition to this, only the Anglophone stories get represented in history and the mass media (unless you make a concerted effort to seek out their stories). The Women and non-English speakers are relegated to the margins – so imagine the stories of Women who fought for liberation and were from the Francophone or Lusophone regions.

In Liberia, the Women of Liberia Mass Action for Peace was established by Women to end the Second Civil War, which included sex strikes, removing their clothes as a form of protest and more. Just like the Liberians, Aya Virginie Toure from Côte d’Ivoire organised over 15,000 Women in peaceful protests during the Second Ivorian Civil War against Laurent Gbagbo in March 2011. What’s even more remarkable was the regional display of solidarity when West African Women from Nigeria, Liberia, Ghana, Sierra Leone and Togo organised the “One Thousand Women March” at the ECOWAS summit in Nigeria in 2011.

Nigerian Women would tell you that END SARS was a feminist movement too but we know that its global amplification was because of the focus on police brutality, affecting both Women and men. Ultimately, it is imperative that we globalise our perspectives and look beyond the Anglophone histories. Sometimes, the diaspora wants to romanticise Africa because we want to be better than what we’re taught but sometimes, we just must accept that it may not have been the case.